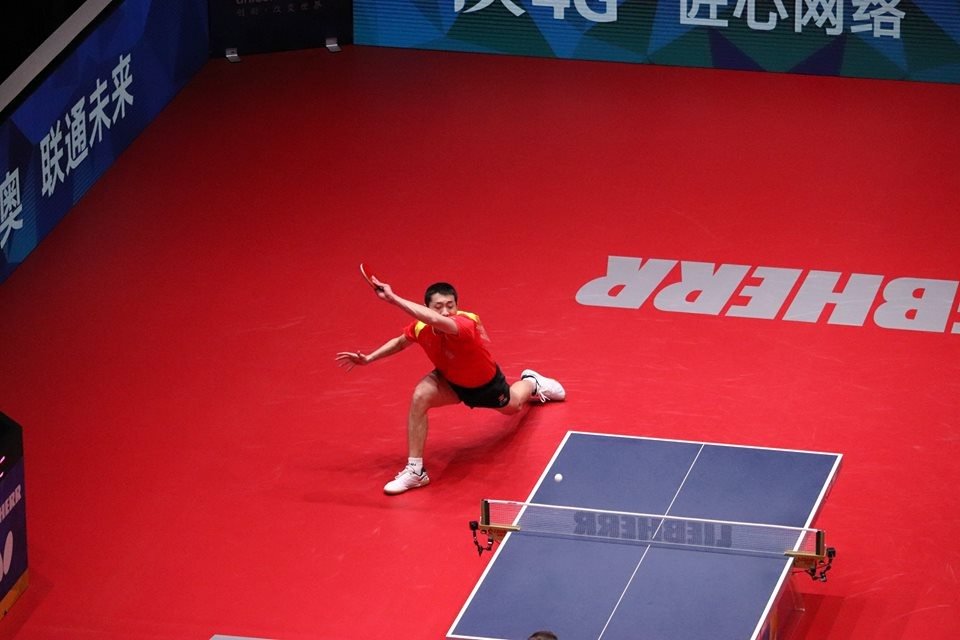 photo courtesy of Steve Rowe
Table tennis is one of the most dynamic sports on the planet requiring three key game elements: Table tennis speed, spin, power, who wins?

If you had to prioritise the three elements, which would be your top choice?

Let’s discuss all three elements, then I’ll place my personal order and leave you to ponder.

Spin started playing a huge part in the game once technology kicked in and this began in the 1960’s. Many Champions were formed via the ability to produce lots of spins, through new high tech rubbers.
Nobuhiko Hasegawa: World Singles title, famous for his heavy topspin and high arching lob shots.
István Jónyer: World Singles title, famous for inventing the sidespin loop shot.
John Hilton: Famous for winning the European Singles Championships, using deceptive chop and float shots. John used a normal spin rubber and an anti-spin rubber on the other side. Both rubbers were coloured red (allowed back then) making it very hard to distinguish what spin was imparted on the ball.
Jan-Ove Waldner: Grand Slam Champion, famous for many shots including; the chop block, BH punch, hook and fade shots. The variety of spin shots, Jan-Ove possessed gave him the upper hand on most via adaption and continuous change at will.
At a young age or lower to advanced level of table tennis, Spin is by far the most effective element and skill.

Early 2000’s power began to overwhelm spin. The ball was increased in size reducing spin and players like Ryu Seung Ming(2004 Olympic Champion) crunched every ball regardless of spin. Wang Liqin won the world singles titles  3 times, with his gigantic forehand topspin. Table tennis began to a new breed of stars focusing on hitting the ball harder, rather than spin focused. Table tennis has been dominated by power players for the past 20 years now.

Jean Phillipe Gatian, comes to mind when speed is the main focus. He won a world championship title using his lightning footwork. A few other examples include Desmond Douglas and Wang Tao, they both gave every player a run for their money because they took the ball super early. Nevertheless, back then speed was unable to contain speed and neither won a major title!

Are we seeing a new trend coming into play?

Spin was the major killer initially, but over the past 20 years power has taken command.
But…
I have been keeping a close eye on China vs Japan for the past 3 years and I’ve noticed a new trend which may be tomorrow’s winner.

Speed has not had the success compared to the other two elements but Harimoto is proving that speed does actually kill.

Harimoto, as we all know gone from strength to Strength and is still in his early teens. He has beaten the best players in the world including Zhang Jike, Fan Zhendong and the Dragon Ma Long. All three, Zhang , Fan and Ma are renowned for their awesome power and they have dominated table tennis over the past 5-10 years.
Harimoto seems to have found a chink in their armour, SPEED!
He played Ma Long two weeks ago and with all of Ma’s awesome power, it seemed nullified. Harimoto, did not give ML time to wind his big shots and even if he did Harimoto used it against ML. Ma Long, would rocket a ball and Harimoto would counter, firing ML’s power straight back at him. Furthermore, Harimoto used speed alongside good placement which saw him win many points by either wrong footing or disabling Ma Long.

Are we seeing a new powerhouse trend emerging?

I believe we are, and Harimoto, still a teenager is proving that speed does truly kill.
Table tennis speed, spin and power, who wins? My personal order:
At no.3 Spin, it had its day but can not live with power at pro level. But it is still king at lower, intermediate to advance level of play.
At no.2 Speed, today I believe power is still the dominant force but very soon I can see it changing and speed will be the new king
No.1 Power is a force not many can deny but speed likes to kill, so let’s see what will happen in the very near future!

My coaching theory and coaching methods:

There you have it, three key table tennis elements that have evolved and change our game over the last 60 years.

Two Huge Losses for Lin Gaoyuan, What Will This Mean?