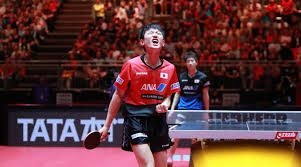 We have surely never seen a better table tennis 13-year-old in the history of the game! 2 years ago an 11-year-old called Tomokazu Harmioto burst onto the table tennis world scene. Harimoto reached the Men’s final at Safir’s (Sweden). He stamped his arrival by beating two players ranked inside the top 100 men’s world ranking list. Remember his name

Since then Harimoto has continued to progress and improve at an astonishing rate. He was recently crowned world Junior Champion aged 13, the youngest junior world champion in history.
Still 13, he has shocked the world once again by defeating fellow teammate Jun Mitzutani current world no.6 at the Men’s Singles World Championships.

I think it’s safe to say Harimoto, is the best 13-year-old the world has ever seen. I also believe we are looking at a future world no.1 and possible a new level of play of table tennis.
Harimoto went on to reach the quarter-final stage of the Men’s World Championships and shows no sign of slowing down. The crazy thought is, at 13 he reaches the world quarterfinals and in 10 years time, he’ll still be considered a young sportsman!

how has such a young teenager achieved what no other has done before?
I’m sure there are millions of factors but I want to point out 3 key things.

He began playing aged 2 and when he was 3 years and four months he took part in a tournament at prefecture level for the first time and finished fourth in the Under 8 competition.
Harimoto, has been playing for 11 years which explains (partially his high level). Other factors include both his mum and dad where international level players. He has been training relentlessly for over a decade. Few players train over two years at a given sport and fewer train 5-6 times per week.

It’s clear Harimoto spends 15-20 maybe more hours per week training. He has given up his childhood to become a phenomenon inside the world of table tennis. The question many would ask or say… does he have a life?
This is a debate which can only be answered by Harimoto. If he loves what he is doing, then he is living life to the best of his ability. If he is forced to live this kind of lifestyle then yes he has no life. From my point of view, he loves every minute, his passion is clear to see. It’s rare to see someone who clearly plays more than most and still maintains such a high level of joy and passion every time they play.

At such a young age, few feel a genuine fear of losing. The world has not inflicted its life pressures yet! and consequences are limited to none (currently). This enables the mind to relax and all skills are allowed to flow freely.
Only the very best in the world know how to access this freedom of play and fear is blocked under enormous pressurised situations.

The question is will this change for Harimoto as he ages? And will his views on life change? Only time will tell…

Age is but a number, in order to become great, sacrifice is required.