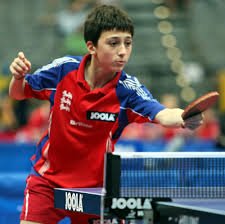 Table Tennis England has revealed their player selection for the European Youth Table Tennis Championships. Making selections for such events can be and is often an extremely difficult task.

TTE, have yet again not selected a full squad and it has caused an uproar on social media. Many expressed their disappointments and lack of understanding, towards TTE’s selection and decision making.
Personally, I believe in selecting a full (England) squad, when it comes to major events.

As a Junior, my aim was to represent my country at penultimate events and I clearly remember playing the National Championships and Master’s Event (Top 12, AKA National Cup). I had players such as Andrew Baggaley, Andrew Rushton and Michael Chan, to compete against. I vaguely remember being told if you do well at both these events and finish inside the top two at the Masters. You would highly increase your odds of a place at the European Championships and no Junior avoided those events! I can’t say for a fact, whether full teams were taken back then, due to youthful ignorance. But I do remember ETTA, expressing their will and importance of international events such as the European Champs.

It feels like TTE’s focus is jaded (possibly lack of care?) and they seem to currently be focusing on the senior men’s team. I appreciate we must back and support good things such as our successful senior team. But I also believe in a holistic approach catering for all, because time has a way of changing things. If we support from all angles we defy time and this all begins with our youth. In order to have another future senior team, we must invest in our youth constantly regardless of their current potential.

There’s a system called EYS (England Youth Squad). This is where the top youth players pay £1600 a year, (information provided by Chris Doran). They receive several coaching sessions throughout the year. Being a part of this squad gives these players the opportunity of possibly representing their country.

A full criterion, currently disclosed is not fully known by most and does not seem to follow its own rules.

Players are expected to attend; events such as; 4*, Junior British League, National Cup and National Championships and EYS training camps. Yet, some of the top players pick and choose events and somehow they are forgiven for doing so. Others may have legit reasons for not being able to attend and they may find themselves ousted by TTE. In fact, two players who won the National Cup (hardest event to win) and many other national events this season have not been selected for the European Championships 2018. Its mind boggling to understand what the selection committee is thinking and doing.

From a player and parent perspective.

I have been playing table tennis between 5-10 years, I go to most national events, I win national tournaments, I win the masters (hardest event to win) I’m ranked no.1 in my age group. I have committed myself to the sport and attend a full-time table tennis school or Club.

My parents invest possibly 10-20k on me over the years. I’m in a country where the economy is one of the most powerful on the planet.

I have paid my fees, attended more than most, bought equipment, have a coach and club, Yet…
Having said all that, my country won’t select me or a full squad to go to the European championships!

A Full Team Must be Entered into Major Events:

It can be hard to select the right players but it’s not hard, selecting a full team regardless of National level.

In fact, a National level is irrelevant, a full team is a MUST! Countries such as; Slovakia, Bulgaria, Wales etc. Enter full teams. These countries don’t have much money, nor do they stand much chance of competing for medals. Regardless they show up in full, ready to compete and give it they’re all. If all countries have TTE’s mindset (sending incomplete teams) big events such as Europeans and World Champs would not exist.

If you don’t enter full squads regardless of the level you’re setting a precedent for a future crop of players. “Train hard, invest your money, win events” and you still may not be selected or go to international events!!
What kind of future are we showing our youth? Working hard, dedication means nothing?! It’s shameful, to say the least.

Japan and China, have wonderful systems and yes, their national structure can predict possible outcomes for international representation. England and other countries don’t have this luxury, yet we must expose ourselves wholeheartedly. In doing so it will push new generations towards greater success. An opportunity to compete for your country is a gift most will never have and TTE are taking that privilege away.  Predictions of poor success on an international scene is no excuse not to take a full squad.

Don’t commit, it’s a lost cause!

Hiding from the big events because we have no chance. It’s like saying, I won’t go to school because I’ll never be a doctor! If you go to school, you may not become a doctor (true) but if you are not exposed, you will 100% not be a doctor. Exposure has other wonderful benefits, by attending a school you are giving yourself the best chance to be a doctor (if it’s your chosen field). If not, you may be something else special but without the opportunity of attending school or an event, your possibilities are significantly diminished.

We are doomed to fail without an opportunity

Personally, I believe TTE’s selections and team decisions have been disgraceful over the past couple of year! I don’t agree with the current system and feel it’s very selfish in many ways. Ultimately being the best in your country must give you the ability to represent your country regardless of international level or capabilities.

Our juniors and cadets are admittedly of a low level at present time. Nevertheless, the youth category constantly changes. A new breed of players emerge every 2-3 years and some weaker generations develop later on due to exposure. A nation’s youth level is irrelevant when sending an international team. England’s top players deserve the opportunity to represent their country.

Whose fault is it?

It’s not the players fault the level is low currently, the nation’s level stems from the governing body, clubs, and coaches who currently implement the sports infrastructure.

I stand by my views and I stand by the players and parents who invest a big proportion of their lives into the sport and yet are rejected for very poor reasoning.

What can be done?

Transparency: TTE, must be clear with their selection Criteria and enforce the rules upon all players.
Full teams: For every major international event a full squad for each category must be enlisted, regardless of international medal hopes. This gives players hope, faith in the system and the honour of representing their country. Even if (worst case scenario) players pay their way to attend, they must attend at all costs.
ETTU (European Table Tennis Union): Should enforce a full national squad entry  where possible
Unite: Clubs, Parents, Coaches and Payers must stand for their rights. If the governing body produces a policy document (criteria) for players. TTE MUST STAND BY THEIR RULING and if they fail to do so! Table Tennis players, coaches, parents and clubs must unite to reject or enforce criteria which have not been implemented correctly or seemingly unfairly by TTE. If the above are not willing to stand or face TTE on such occasions, then elect a representative to represent them.

Success comes at a price, you can’t let good hard-working people down because it does not suit your agenda.