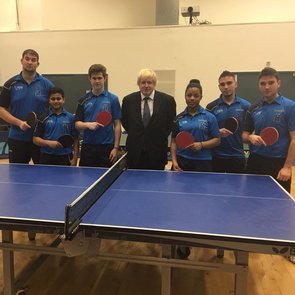 How important is Table Tennis in Schools?

I think many under value the power of table tennis in schools or any sport for that matter. Minor sports can have greater value for certain individuals but due to commercial undervalue they are overlooked.

Yes, education is very important but it’s not for everyone! If it wasn’t for sport inside schools we would miss many of today’s past great sportsmen and women. I went to a school in Camden Town and there was access to virtually every sport imaginable: football, Gym, basketball, Gymnastics, netball, athletics, swimming, cricket and table tennis.

Once I realised my passion was table tennis, I utilised the 3 tables permanently set up in a small gym area above the swimming pool. The first few years at the school, I struggled socially and academically but once I started playing table tennis, everything changed for the better. I began to focus more, I was driven, met new friends, developed a sense of belief, my grades began to go up, I had success for the first time and was recognised for it.

The PE teacher Mr Newman (a legend in my eyes) was a half decent lower level, local league player and he encouraged me to play as often as possible and to believe in my own ability. I went from turning up late to school most days to never being late and not missing any days (the fake “I’m not feeling well mum scenario”) were gone! I would go and practice my serve or play with friends; morning, lunch and after school.

Table tennis is unrecognised in terms of its powers to change and aid a young person’s life.  But a charity (a few years back an organisation today) called Greenhouse Sports noticed the power of table tennis in schools and they invested in the sport around 14 years ago, via a gentleman called Michael DeGeorgio. Greenhouse have 12 maybe more full time table tennis programmes inside schools all over London. The programmes have thousands of kids playing table tennis and some competing at high national level. These programmes have full-time coaches alongside possible assistant coaches, based inside deprived schools. They provide: before, during, lunch and after school coaching sessions, tournaments, access to better equipment and development.

Table tennis inside schools gives an opportunity to develop your character regardless of age, or ability. Its a tool hardly utilised and we need to develop a system that allows players to develop inside schools. This system needs to feed the players into a mainstream table tennis club/clubs. I believe we would see huge developments in the sport. More importantly youth of today would progress in terms of their attitudes and behaviours.

Look at football as a sport, most kids play during school and there is often a coaching session or structure. This seen nation wide all over England which leads to clubs and possible professional play.

We need to develop systems that link clubs to schools throughout the nation and provide a coaching service that enables a simple but clear pathway.

How Long Have You Been Playing Table Tennis?