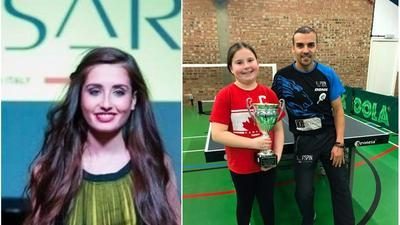 Sister’s death inspires ten-year-old table tennis prodigy. Miri Rosenberg took up the sport of Table Tennis in 2016 as a way to cope with the sudden passing of her sister, Liora.

Miri currently 10 years old has excelled in table tennis since the death Miri – Training with Eli Baratyof her sister, Liora, in 2016.

Miri was recently crowned the country’s “most promising young Jewish table tennis player”  just 18 months after taking up the sport. The award was given to Miri at the Maccabi Open (Jewish Table Tennis Championships).
Lauren and Stuart, (Miri’s parents) bought her a table for her ninth birthday, in August 2016. Mrs Rosenberg said she wanted to buy her daughter “something we could all enjoy as a family”.

Mrs Rosenberg said: “Miri was very young at the time, but table tennis instantly became her passion. I think it was something to give her a lift during a difficult time.”
Miri added that table tennis is helping her to process and move on from the tragedy, saying it is as if “she is playing with me”.

After finding that Miri had a knack for the sport – which Mrs Rosenberg puts down to “great hand-eye coordination”. Miri then joined the table tennis club at Finchley United Synagogue.
Miri’s development was rapid and she went on to win a medal at a Maccabi GB inter-synagogue competition. Miri now plays most nights of the week at different clubs and has been taken on by renowned table tennis coach Eli Baraty.

Despite being two years younger than some of her competitors, she reached the semi-final of the under-12 singles at Sunday’s Maccabi GB National Table Tennis Champions, held at Edgware London.

Miri in action with her new coach, Eli Baraty

Her parents and sisters Judy and Adina, cheered Miri at the event. They felt privileged to watch as Miri was handed the Yoram and Sylvia Katz Award. This award is given to the most promising young Jewish player in the country and is handed out annually.
Miri said her ambition is to represent Great Britain at an Olympic level and enjoy a top-level international career.
Mrs Rosenberg said: “It has all been quite a surprise – none of us are particularly sporty but she just has this talent. We are all very proud and happy for her and with her.”

Written by JC Newspaper and edited by Eli Baraty

Be sure to follow me for more new, blogs and coaching feeds at:

A guide in FINDING THE BEST TABLE TENNIS COACHING for You!