“What is said or seen, is only a fraction of what is actually done!” ~ Eli Baraty

I have been involved in the sport for over 25 years and together with my eBaTT team, we provide the highest level of table tennis coaching services. eBaTT is a vocal and physical advocate for table tennis. We visit locations all over England, Europe and now the World, in pursuit of helping people with their game. We work with players of all levels and backgrounds; youth, clubs, corporate companies, schools, National teams, and professional players.  We have developed The eBaTT Formula to help you with you develop your table tennis game. 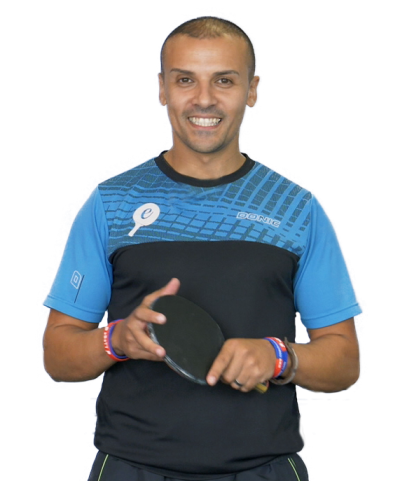 Why I Coach Table Tennis

When I played, all I wanted to do was beat the player in front of me. Today I am a coach wanting to empower and provide the best opportunities for my player’s, so. that they can also be the best version of themselves.
I am continuously developing my skill’s, focusing on being a holistic table tennis coach and providing with passion and care for my players. I have massive ambitions and I’m constantly building towards my vision. The goal is to have an institute that provides a table tennis pathway for all ages and levels and one central hub that caters for everyone.
My vision began when I created and developed The Harefield Table Tennis  Academy. I created a system which catered for players aged 11-18 of which I was hoping to expand by hiring a full-time table tennis coach for the surrounding areas. Any players from the surrounding junior schools would have been guided towards joining Harefield. They would have been given a bespoke education and table tennis training programme. Furthermore, the pathway would have been increased with our (Brunel University) link and our current table tennis club (eBaTT).  The full vision was to grow and expand into a full-time table tennis centre. I believe England can be Europe’s leading table tennis nation with a formulated structure alongside dedicated table tennis centres.

As a player looking for a coach, you should consider the above and once found you must apply yourself by; working hard, focusing and listening to the coach.

It all began with a film called Forrest Gump, back in the year 1996, I had decided there and then that Table Tennis would play a huge part in my life.
I started the journey at a small table tennis club located in Hendon (north-west London). The club coach and manager was a middle-aged gentleman called Harold Ismaan. He coached me the basic strokes; rules of the game alongside backhand and forehand and introduced me to local league. From the small club that had 4 butterfly tables, I progressed to another club called London Progress, at the time England’s leading table tennis club. There I quickly developed my game by watching many of England’s best players and top coaches (at the time). I decided to continue growing as a player and felt I needed more, this led me to one of Europe’s best tennis de table club in (France).

As a Table Tennis Player, I Dreamed of Becoming World Champion One Day! 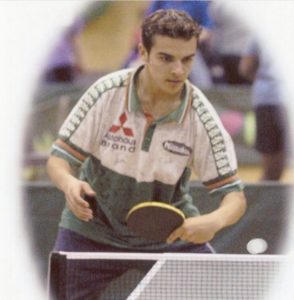 When I was a full-time player based in France (Paris) My Club, a negative experience soon shunned my table tennis dream of becoming a (World Champion). After a year in France, I came back to England and changed the course of my life. My then coach (Gideon Ashison) who also coached Darius Knight offered me his coaching position at King’s College Wimbledon. I Coached at Wimbledon for 4 years with plenty of valuable experiences.

That position led into a head coaching position at Barnet Table Tennis Centre which catapulted my coaching career. I flourished at the club for another 4 years with lots of success, including Junior British League titles, lots of my players getting selected for England squad and representation. I was hungry for more success and alongside Barnet TTC, I was asked to coach the England Youth Squad, which included some of Englands Finest players today such as Liam Pitchford, Tin Tin and Sam Walker.

Due to my experiences and success, I headhunted for a lead role of becoming Head coach at The Harefield Table Tennis Academy. A full-time table tennis programme alongside education at a public school that had an onsight boarding facility. 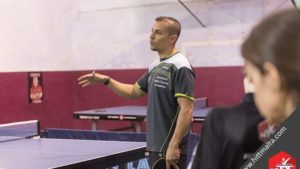 After 16 years of coaching alongside many coaching experiences, I decided to become a Free Lance Table Tennis Coach. This allows me to share my knowledge and experience with anyone and everyone. I work; alongside Table Tennis clubs, I host Table Tennis training camps, I am invited as a guest coach all around England and abroad.

Aged 22, I was extremely ambitious, similar to my playing career I wanted to be the best. I believed and still do, if I was unable to become a top world class player then I would produce them. I wanted to give players the opportunity of becoming elite and provide the best coaching possible. I worked as hard as could developing many top England cadets and Juniors. 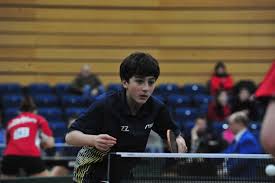 At 23, I was asked to coach the England youth squad which was based at Lilleshall (National Sports Complex). I was privileged to assist and run the coaching sessions which was held once or twice a month for 2 years.

Players in that period included:

It was a table tennis programme that ran alongside your education (aged 11-18) based in a state school called (THA). The System allowed students to train before school, during school – PE lessons or any free periods, in a small group or 121 coaching sessions, that was followed up with after-school group training sessions. I expanded the venture by providing a table tennis coach for the local primary schools in and around Harefield area which was used as a feeder programme and developmental period prior to joining Harefield. This meant players who chose to join Harefield school would have the basic skills, elevating their development once they joined Harefield’s table tennis programme.

They could choose to stay at the school for Sixth From which was again a bespoke table tennis programme was developed (More about Harefield click here), followed by our link at Brunel University (Local to Harefield). Player’s had the option to either continue playing at Harefield and Brunel while attending University or could follow other personal options which was always supported. 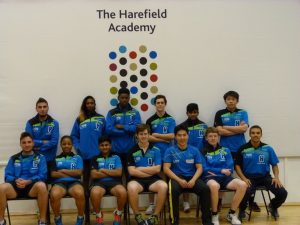 Furthermore, my vision was to open a full-time table tennis facility on site (Harefield) and open a purpose-built table tennis centre. The club and centre would have catered for all levels of play and gathered the local community in play and support of our the elite players. Lastly, the centre would have hosted national and international competitions plus camps using the onsite boarding facility.

Players and Coaches I have Produced, Developed and Worked With

Zak Zilesnick (AKA Zak Abel): I started coaching Zak from Day 1 and he is possibly the most all-around talented/gifted player, I’ve worked with to date! At 9 Zak could barely hold the bat and became no.1 in England when he was 11 years old. This was after he won both U12 and U13 National singles titles. Zak won many national titles and played for England many times and he maintained the no.1 spot for 4 years up until he decided to change careers and become a singer.

Reece Tan: Joined Barnet TTC when he was 11 and went on to become England no.2 cadet beating many top juniors. Aged 16 he decided to stop due to lack of opportunity via table tennis England, Reece played for England once.

Guy Ben-Aroya: After being told, “he would never be any good”, via an eX-England player and coach. Guy, proved that hard work and dedication alongside discipline has no limits regardless of what others say or believe. Guy reached no.5 in his age category before moving his focus onto education and fitness. Today Guy, is back in the game as a coach and associate of eBaTT

Eden Fung: Developed his game into England no.7 U13’s and a top ten cadet before changing his focus towards education.

Ping Ho: Before his sister became a star, Ping was ranked top 3 in the country and representing England in U13’s and Cadet level.

Emran Hussain: Reached top 12 in England as a junior and a top 20 England senior player.

Chris Doran: Represented England at all age categories and highest England ranking no.3 senior. Chris worked with me at Harefield Academy for a year, focusing on becoming a future table tennis coach and rejuvenating his table tennis career. Chris was a junior and senior England international with many top performances nationally and internationally.

Darius Knight: Worked and coach alongside our personal coach Gideon, Darius was no.2 in Europe as a cadet and also reached no.2 on the English senior ranking list.

Filip Szymanski: Polish senior international, with many world-class performances and titles. Filip has had a wonderful playing career of which I was privileged to work and coach him for over 10 years.

Israel Awolaja: Joined Harefield academy as a top 50 England junior, after a solid year he moved up to no.6 and today is a top 30 England senior.

Mitchell Jones: Developed at Harefield where he became a 4* Junior singles winner and a schools boy England international.

Danny Lewis: Reached a top 12 England ranking, which qualified him into the Masters and helped many players develop their games.

Gaurav Aravind: Within 4 years of playing Gaurav reached no.6 as an England junior and finished in 5th place at the National Junior Cup.

Adam Reed: There was a time when Adam was ranked 400 as a junior but dreamed of becoming a top player. with genuine hard work and dedication, Adam leapt up the rankings to a top 20 England junior and an English school International.

Zahna Hall: One of the most unique players, (left handed, defence on the backhand side and attack on the forehand). Zahna represented England and was a top 3 England Junior. She had beaten every player and had reached 8 consecutive 4* junior finals. Zahna finished 3rd at the junior national championships and was feared by every player she faced.

Worked and Working With:

Tom Jarvis: When he was 12, I noticed his special attribute (Grit), I asked him to join my JBL team and since working with Tom from the side I saw him become no.1 for his age and grow to a world-class player.

Sam Maybe: I first met Sam when I was coaching the England youth squad, I felt obliged to help him develop his game and again he joined my JBL team plus attended many of my training camps. Sam was no.2 for his age for many years and continues to play today, even though he has suffered many health issues over the years.

Ding Yi: Former World no.7 and Veterans over 40’s World Champion, coached at many of my camps in England. I still consider Ding Yi a very good friend while he focuses less on coaching and more on his (table tennis company)

Mario Genovese: Mario and I connected via social media and Ping Pong World Championships which lead to coaching his daughter at Harefield. We grow our friendship and partnership via our love for the sport and today we have the United Table Tennis Coaching Team

You can hire me and my team to host a ping-pong party or put on a table tennis exhibition at Bar Mitzvahs, Corporate Events, Coaching Seminars and Parties.