Guy Ben-Aroya joined eBaTT in 2018 as part of the coaching team but was an original eBaTT student 15 years ago. Guy, was a former England no.5 beyond the likes of Liam Pitchford and Gavin Evans. He went on to reach top 10 England Juniors but stopped committing aged just 16 to focus on bodybuilding, education and try to regroup as a young man who had some troubled times. Guy has a First Class Degree in Sports and Exercise Science and provides bespoke Table Tennis Fitness training programmes.

I first started playing table tennis when I was 9 years old, at Barnet Table Tennis Centre. I wasn’t the most gifted individual and I found basic technical strokes difficult to master but I loved the sport and wanted to become the best I could be. With the help of my coach, Eli Baraty, alongside pure hard work, drive, persistence and enthusiasm; I was able to achieve a ranking of number 5 in England (Cadets) at the age of 14. Once I reached this level, I started to compete both nationally and internationally. As a junior, my highest ranking was number 7 in England, whilst being ranked number 1 in my county (Hertfordshire) Under 18’s. 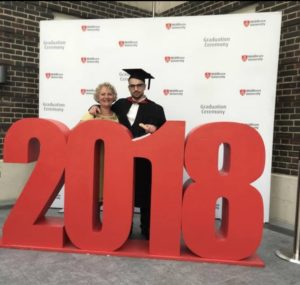 At 16 I began taking a few steps back from playing and focused more on coaching and education. After school, I became a fully qualified Personal Trainer at Oaklands College. It was quickly evident that this was not the career pathway I wanted to pursue which led to a one-year access course. This enabled me to start my undergraduate degree in Sports and Exercise Science (Teaching & Coaching) at Middlesex University. I recently graduated (May 2018) and achieved a First-Class Honours Degree. I have now decided to use my coaching degree as a stepping stone to becoming a full-time table tennis coach working alongside Eli Baraty the eBaTT brand.

Guy, was involved with some rough local neighbourhood characters and this often led him astray. nevertheless deep down Guy was always a good person and wanted to do good by others, which ultimately